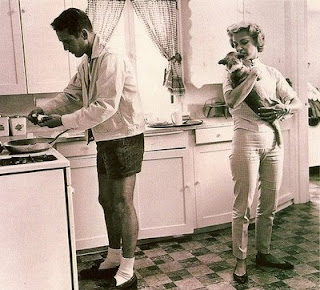 Jade and Leo are playing house. Technically, the couple doesn’t live together. He pays rent on one side of town and she pays it on the other. But they enjoy going through the pretense of doing what couples who do live together do. Jade spends five out of seven nights at Leo’s house. She cooks, cleans, and coddles his ego just like a wife would do for a husband. Leo is attentive to his girl and her needs and the couple’s relationship seems to be working for them.

Other folks have begun to question just what it is this couple is doing or not and Jade realizes she truly doesn’t have any answers for them that might actually make some sense. She and Leo have never really discussed making their arrangement permanent. The discussion of marriage was a conversation held in passing with both acknowledging that marriage is an institution they might consider tripping through at some point in time. Just not now. When the conversation ended, they started playing house.

As Jade told me her story I couldn’t help but think about that old adage, “Why buy the cow when you’re getting the milk for free?” Leo’s got dairy coming out of his ears. It washes his dirty drawers, keeps the dust balls from accumulating in his corners, and warms his bed more nights than not. Why should he worry about acquiring himself some cattle when he can have all the steak he wants and eat it too?

I asked Jade what the payoff was for her? What was she getting out of their arrangement? Jade paused before she finally responded that she wasn’t quite sure. She said she loves doing for Leo the way she does. She enjoys the days and nights that she and Leo share time and space. Being with Leo beats being alone any day of the week. I then asked her why she was feeling conflicted?

It seems that everything is good and fine until someone else questions their unusual arrangement. Then Jade starts to feel some stress. Ultimately, if it works for her and him then it really doesn’t matter if it’s working for everyone else. Jade and Leo have to do what makes them happy. If Jade being Leo’s ice cream and him being her beef works, I say dine, and dine well ‘cause neither one of them is hurting another soul. When one or the other starts to have some issues with their arrangement then thats when they might need to reevaluate their game plan. Until then they both say they’re happy so what more could anyone else ask for?
Posted by Deborah Mello at 1:48 PM
Email ThisBlogThis!Share to TwitterShare to FacebookShare to Pinterest
Labels: Love Stories