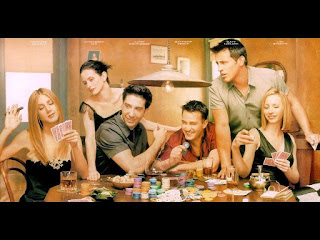 There is a debate raging on whether or not married folks can or should have friends of the opposite sex. Since I was a kid most of my friends have always been male. For no particular reason, not all women jive well with other women, or men with men, for that matter.

I married a man who was adamant that no good could come from such relationships. He firmly believed that no man just wanted to be “friends” with any woman, particularly one that he was married to. Subsequently, I severed ties with a number of really good friends. It's a decision I deeply regret. After many years I came to understand that his issue with my friendships had to do with his insecurities and the issues of trust between us more than anything else.

This past Sunday pastor preached about infidelity of the heart. The gist of the sermon was how to have an affair with your spouse and not have an affair with someone else. Pastor maintains that married couples do not need, nor should they ever have, friends of the opposite sex. Pastor claimed God made men and women to be attracted to each other and there is no way to deny that attraction. Somewhere in his bible there was scripture to support the sin and evil that could come from such liaisons. I personally didn’t agree with everything pastor had to say, but then that was me. I just knew from my own relationships, my friends and I weren’t interested in jumping into bed with each other just because they were male and I was female.

I’m not a woman who has a problem with her spouse or companion having female friendships. If I’m in a relationship with a man I love and trust then I trust that those friendships will never cross the line to disrespect. Not every woman feels the way I do.

Piper’s hubby has female friends. Piper is well acquainted with most of them. Piper has never had an issue with any of them until lately. There are two or three of these friends that clearly don’t have their friend’s best interests at heart.

Friend Number One is an old classmate of Piper’s. This friend seems to spend an exorbitant amount of time telling Piper’s husband about Piper’s old trysts and liaisons. Piper has an issue with this since most of the telling is fabricated, exploited, or blown completely out of proportion. Piper’s having difficulty reconciling why the husband seems to enjoy the friend disparaging Piper every chance she gets.

Friend Number Two doesn’t think Piper’s the best woman for the husband and doesn’t mind saying so. This is a friend who gets great pleasure from predicting doom and gloom for the duo. Piper can’t figure out the draw here either.

Friend Number Three clearly wants to be more than friends. She’s an ex-girlfriend of the husband’s and wants to be in Piper’s shoes. This friend likes to jokingly make threats about doing Piper harm. In fact, at least one of her daily text messages to the husband is a message that she wants him to relay to Piper about kicking her butt, smashing her face, or breaking one of her limbs. Piper doesn’t get the funny-ha-ha about it that the husband seems to think she should.

I had to tell Piper the husband has clearly crossed the line. Friends or not, no man who truly values and respects her would allow any friend of his, male or female, to disrespect her so blatantly. The fact that her husband does says more about him than I think Piper cares to know.
Posted by Deborah Mello at 1:14 PM
Email ThisBlogThis!Share to TwitterShare to FacebookShare to Pinterest
Labels: Rantings