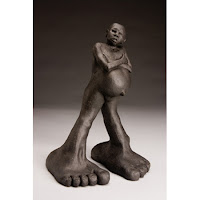 I am a collector. I collect tea pots, pottery, paintings, and some “stuff” that people can’t seem to figure out why I have to have. But I have an affinity for beautiful things. Many of the things I collect I acquire simply because I find them beautiful. Beautiful things bring me immeasurable joy. Today was the last day of the county’s Open Studio Tour. It’s an annual event hosted by the Artist’s Guild to promote the work of local artists. The tour enables you to walk into an artist’s workspace to see how they do what they do. It’s also a fascinating opportunity to acquire something beautiful where you least expect it. 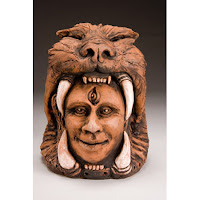 There were only a few studios I wanted to visit. Artists whose work I’ve admired for some time and wanted to see what they had that was new. And then there was one artist, Laura Farrow, whose work I wanted to experience for the first time. Laura Farrow is a sculptor. Some of her work is influenced by her experiences in Africa, Tanzania specifically. Some of her work is influenced by her fascination with indigenous cultures. Other pieces are influenced by the human experience of just being a woman in a big wide world. Her artwork is truly extraordinary and for the brief time that I was able to walk her studio I became enamored with many beautiful things. 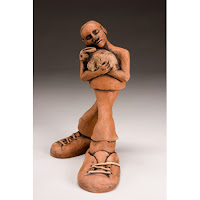 I asked Laura why she’d named her studio, BROKEN TUSK and she told me a story about the Hindu, elephant-headed deity, Ganesha. Ganesha is the Lord of success and destroyer of evil and obstacles. He is also worshipped as the god of education, knowledge, wisdom and wealth. He has the head of an elephant and the body of a human being with a substantial pot-belly. Ganesha has a broken tusk which he holds like a pen in his lower right hand. It is said that Ganesha broke off his tusk in sacrifice to write the Mahabharata, the great Hindu epic. Laura said she was taken with the idea of one sacrificing a piece of themselves for their art and thus BROKEN TUSK STUDIO came to be. 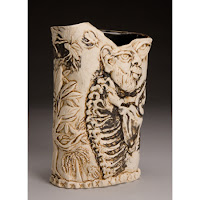 Her explanation resonated deeply with me. I understand sacrificing a piece of one’s self for one’s art. I do it with each story I tell. Every book I’ve ever written holds a part of me that I’ve gladly given away to be able to do what I do and do it well. I’ve discovered recently that my best writing comes when I’ve been willing to expose myself, no matter how vulnerable that might make me. It’s that vulnerability, when I let down my barriers and allow myself to spill into my words that feeds and nurtures my best work. It’s when I’m broken and I give those shattered pieces of myself away that my writing grows and my spirit soars and I am left with something that is sheer beauty for someone else to read.
Posted by Deborah Mello at 4:48 PM
Email ThisBlogThis!Share to TwitterShare to FacebookShare to Pinterest
Labels: Other Folks' Stuff