WE ARE ALL TREYVON 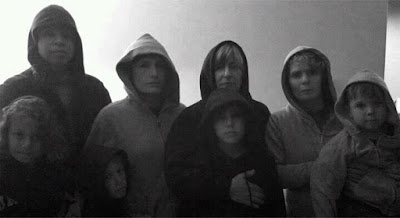 “Dear parents of Treyvon Martin, As a white mother of a white son, I do not pretend to know what you must be going through right now. I respect and honor our differences. My neighbors and I have taken these pictures because we want you to know that you are not alone. We have all wept for your son. ..We dress our children in hoodies because we want them to grow up to share the burden we feel.  We want them to know that if a child or a group of children are not safe in this world then we are all responsible.  We want them to know that today, at this moment, we are all Treyvon.  May God bless you and bring you comfort.”


The above image and open letter to the Martin family was posted on someone's Facebook page.  I reposted it there and here because it simply spoke to the core of my heart and spirit.  Much is being said about Treyvon Martin’s attire the night he was shot down while walking home from a convenience store with a bottle of tea and a bag of skittles in his hand, doing nothing but talking on the cell phone to his girlfriend.
The all-intelligent (and I say that facetiously) Geraldo Rivera weighed in that had Treyvon not been wearing a hoodie he probably wouldn’t have gotten shot.  As a woman who lives in her hoodies during the winter months I doth protest.  A hoodie is my comfort top of choice and it should not get me shot no more than wearing my high-heeled Louboutin shoes and mid-thigh length skirt should get me raped.
The Klu Klux Klan made hoodies their wardrobe of choice but you didn’t see many of them getting shot for no reason at all.  There has been a national outcry over the mishandling of the Treyvon Martin case and saluting the wearing of a hoodie has become the non-violent movement where people of all ethnicities are demanding that there be justice for Treyvon and fairness for all.  Even my seventy-seven year old uncle, an ultra-conservative, khaki and polo shirt kind of guy, broke out the one and only hoodie in his wardrobe to protest and make a statement.
And as my beloved uncle emphatically stated, any attempt to offer any justification for Treyvon Martin’s murder is as weak as water.  So I will continue to wear my hoodies proudly.
Posted by Deborah Mello at 2:26 PM
Email ThisBlogThis!Share to TwitterShare to FacebookShare to Pinterest