SEDUCED BY A STALLION

It doesn’t seem possible that it has been four years since I introduced the Stallion men, the four billionaire brothers out of Dallas, Texas.  Oldest brother John Stallion’s story was the first, told in my book, To Love A Stallion.  Since then two additional brothers and a cousin have had their stories told.
I really loved the first two brothers.  John was like a fine drink of wine on a summer’s night when Marvin Gaye done got you hot, buck naked, and thirsty for something you didn’t even know you needed.  Then came brother Mark in my book Tame A Wild Stallion.  Mark was more rum punch in the desert heat with Wyclef Jean guiding your shimmy, and a hard body grinding you at your best friend’s blue light basement party.  Brothers Mark and John I liked very, very much!
I struggled with the next brother.  He was the baby.  By the time I finished Luke’s story, Lost In A Stallion’s Arms, I was feeling him more but with his youthful exuberance he was still very much an anomaly to me.  Luke was like The Fresh Prince and Summertime, young and impulsive, fun and fearless.  He was one of those devilish drinks, Sex On The Beach, Slow Comfortable Screw, Fuzzy Dick, or maybe a Piece of Ass, in a large plastic cup with a cute little umbrella in it.
The Stallions had a cousin tossed into the mix, Travis Stallion, whose story Promises To A Stallion, was one of my favorites.  Travis had more maturity for my blood.  He was military and I absolutely adore a man in uniform.  Travis was a hot cup of coffee with a double shot of rum on a cold night and a very tall Long Island Iced Tea when it’s warm outside.  Travis had me trippin’ on Tyrese, Joe, and Jaheim.  Travis just had me trippin’!” 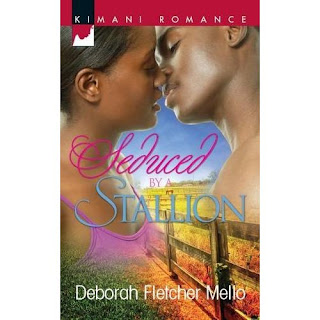 And now I’m thrilled to introduce the last brother’s story.  Seduced By A Stallion will be released on April 17th and will kick off a very good year for the Stallion family.  There will be two Stallion stories this year, the second, Forever A Stallion, coming in August and the introduction of their extended family.  And three, count ‘em, three books coming in 2013!
Matthew’s story challenged me in a very good way.  Matthew is the most conservative out of the four Stallion brothers.  With his Harvard law degree he’s accustomed to doing things a certain way.  He’s a 25-year-old scotch, refined and proper without being stuffy.  As cool as a glass of Courvoisier after a prime rib and lobster dinner.  He is old school slick like Otis Redding, Al Green, Bill Withers and Sam Cooke and as fine as an expensive aged wine.
So preorder your copy now!  I can’t wait for you to read about Matthew.  And I can't wait for his story and the return of my darling Stallion men to get here!
Posted by Deborah Mello at 6:30 PM
Email ThisBlogThis!Share to TwitterShare to FacebookShare to Pinterest

No Way!!!!!
I spazzed just a little bit the minute I saw the word Stallion in your post! I'm so excited about Matthew's story, I don't even know what I'm gonna do until April but I can't wait :)

All I can say is...it is about time, kept me waiting and salivating about my Stallions. What is a sister to do except wait!!
Bridget