A DAY OF SHEER PERFECTION 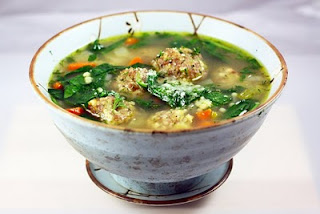 It was a rough start to the day.  A wild night left me with little sleep.  Then my rest was disturbed by the loud thump of a teen’s rude stereo.  Crude rap should not be the first sound heard on a beautiful Sunday morning.  To make up for it the kid gave me ten minutes of gospel and I was appeased.  Then the day improved significantly.
I caught up on some writing while the men were off doing men things.  It was quality alone time.  Then I was in the mindset to go prowl the stores to buy myself something pretty.  But it was cold outside and I don’t like cold.  So I decided instead to stay inside and make a pot of homemade soup.
I made the meatballs first.  Ground beef with just the hint of breadcrumbs and an egg, then seasoned to perfection and rolled into picture-perfect orbs.  While those were browning in the oven I caramelized an onion in my cast iron soup pot, adding a crushed clove of garlic, julienned carrots and diced celery.  When those onions were translucent and ready, I threw in two bunches of fresh, organic spinach and tossed them just until they were wilted.  After adding eight cups of chicken broth, two freshly diced tomatoes, a few ounces of elbow macaroni and a spattering of seasonings I left the whole pot to simmer slowly atop the stove.  Twenty minutes later I tossed in those browned meatballs and soup was ready.
The meal was complete with grilled cheddar cheese and tomato sandwiches on thick, crusty whole grain bread and deep glasses of rich, red merlot.
Now I’m curled up beneath my favorite blanket with a new book, Bernice L. McFadden’s latest release Gathering of Waters, while brownies are cooling on the counter.  I am certain that after a few chapters, a decadent dessert, and a large mug of hot chocolate tea, my day will end on a note of sheer perfection.
Posted by Deborah Mello at 10:28 PM
Email ThisBlogThis!Share to TwitterShare to FacebookShare to Pinterest