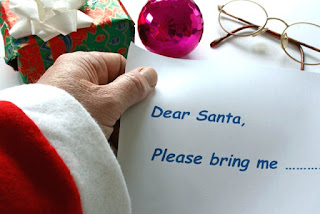 So it’s been a while since I last wrote you a letter. It was the early 1970’s if I recall when I asked for a pony for the third time and for the third time didn’t wake up to find one in the back yard. The third time, not that I was counting or anything. I don’t hold a grudge but I think you should know, for future reference of course, that a Chatty Patty doll does not measure up when a girl is expecting a pony. Neither does a dishwasher when you’re wanting diamonds and wool socks from Wally World when you kind of had your hopes on Broadway tickets. But hey, I’m sure with all the letters you have to read each year and all of the requests that you get, meeting everyone’s expectations is a bit of a challenge for you and some things are bound to get missed.

With all the things happening in the news lately that peace on earth, good will toward men thing seems to be kind of a hit or miss for you as well and I know plenty of other folks have been asking for that too each and every year. But hey, I get that there’s only so much that you can do. I can just imagine that you’ve got your hands full trying to reel them elves in with all that eggnog being guzzled and I won’t even get started on the reindeer. Bright nose my behind! Rudolph may want to try a 12-step program for what ails him!

But I digress! Santa, I’ve been in a bah humbug kind of mood. It’s been a little chilly down here in the South and you know I’m not a fan of cold weather. You can drop a dusting of snow on Christmas morning, just for effect but keep the bulk of it up there where you are. Trust me when I tell you it really won’t be missed. It doesn’t need to be eighty degrees but below freezing isn’t working either. And if you can’t swing that, two round trip tickets to an island paradise (all expenses paid, of course) would work nicely.

I’m thinking, Santa that I’m probably sitting on both your naughty and your nice lists this year. You know how I tend to do things! So when you’re doing that checking it twice thing and you think you’re seeing double when you run across my name, don’t sweat it. I’ve earned every ounce of that coal you have for me because I have had a very good year being as bad as I wanna be! Just throw in one of those fancy grills for the deck this summer too and I think it will all balance out nicely.

Look at you with your rosy cheeks, just blushing! At least when I was being bad, I was very good at it. And I’m just saying!

But I really just wanted to wish you a Merry Christmas, Santa and to tell you that I’m over that pony that you never brought me. I’m riding Stallions now. Big ones. And I already have one of my own. A stallion that is. A girl didn’t want to risk you getting it wrong. Again. And I’m trying really, really hard to be really, really good to him. Even though he kind of likes it when I’m bad. But that’s a whole other letter for another time. I might even write a book about it.

So, keep doing what you do best, big guy! And by the way, you’re still looking good in your Santa suit. What did you lose? Ten, fifteen pounds? It’s a good thing too because they’re not making chimneys like they use to.

Yours truly,
Still singin’ and swingin’ and getting’ merry like Christmas,

funny.. I needed that laugh. Thank you

Merry Christmas, Carla! May your holiday be joyous and blessed.