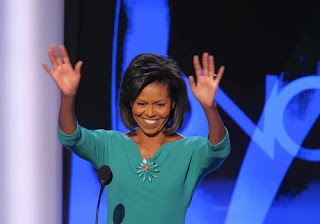 I imagine that the job of being the First Lady of the United States must be a bit daunting at first. It’s not like it comes with a clear cut job description. It does of course come with some exceptionally high expectations. When you consider that the First Lady must not only validate her husband’s character, but also her own, then it certainly makes sense that the journey to acceptance is not always easy.

Michelle Obama has become a very public figure and has accepted the role of aspiring First Lady with sheer grace. She has also accepted the uncomfortable scrutiny that comes with that responsibility. Since her husband announced his candidacy, she has taken some serious flack. I bet the conversation between the two to make that decision, as well as the subsequent conversations as the last few months have unfolded have been quite interesting.

For some time now she’s been hit by a wave of unflattering and sexist media portrayals. Critics have called Michelle everything from unpatriotic to cold. I’m certain some of the more disparaging remarks haven’t sat well with Michelle or Barack. They certainly haven’t sat well with me or many other black women who have been inspired by our sister’s strength and fortitude.

I was duly impressed with Michelle’s opening speech at the Democratic National Convention. She epitomized what many black women strive to be: strong, independent, and successful. She exemplified what a black woman with her own convictions can accomplish on her own if she sets her mind to it, independent of a spouse or partner. She also belied the stereotype that strong black women are also angry black women.

Michelle openly spoke of balancing a successful career with the responsibilities of raising two beautiful young daughters. I remember when Hillary Clinton was campaigning for her husband. The media ran with her comment about not sitting home and baking cookies. Having observed Michelle Obama these last few months I have no doubts that she’s home baking cookies with her babies as well as being a successful career woman and supportive helpmate to a man she loves and adores.

From the beginning Michelle committed herself to her husband and his dream but not at the expense of her marriage and her family. Nor has she been willing to compromise her principles or her beliefs. She stands independent of Barack while standing whole-heartedly by his side. She will undoubtedly be an admirable First Lady.
Posted by Deborah Mello at 1:18 PM
Email ThisBlogThis!Share to TwitterShare to FacebookShare to Pinterest
Labels: Politics/Election

A role model for all to see!