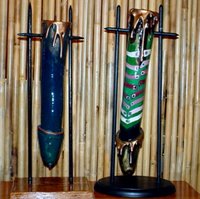 Mr. Ben is well in his early nineties. He is a gregarious old man with quite a scandalous history if you believe even a third of the stories he is known to tell about himself. Mr. Ben was serious eye-candy back in the day because he’s quite dashing now with his snow-white crown of curls, the prettiest chocolate complexion anyone could wish for, and gray eyes that always twinkle. He has this infectious laugh and smile and I imagine that it didn’t take much for the ladies to fall for his very Southern charms.

Mr. Ben stops by every so often to chat and this week he came to tell me about his new lady friend. She’s younger, somewhere in her seventies. Last weekend this lady friend invited Mr. Ben to her place for Sunday supper. After an old-fashioned meal, she invited Mr. Ben into the bedroom for dessert -- a little taste of her sugar and sweets. Unfortunately, Mr. Ben had to decline. It would seem that his “johnson” was suddenly diabetic and not UP for the task. He let his friend down gracefully of course, telling her that he thought it was a little too soon for the two of them to be rushing into anything. Mr. Ben was quite comfortable sharing his dilemma with me. It seems that I’m a really good listener. As well, he thought I might have some advice for his situation.

Now, since I don’t have a “johnson” of my own, nor have I had much experience with “johnsons” that don’t work, I wasn’t quite sure what kind of advice I could offer so I just told him to relax. I muttered something about nature kicking in when it was good and ready. And I did all of this with a straight face. Later, as I was recanting the episode to a friend and finally rolling on the floor with laughter, I was reminded of a show my artist friend, Olivia Gatewood and I did a few years ago. It was “organic” art, a series of gourd sculptures that Olivia created. We actually had the audacity to display them on the front wall of the gallery, right in full view of the window. 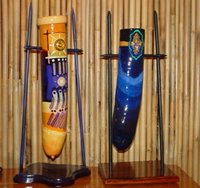 One of my favorite moments was a couple visiting for the first time. She was very conservative and a tad uptight. He was much more open-minded. She took one look, rolled her eyes skyward and scurried in the opposite direction as if they might bite her. He, on the other hand, took some time to examine each one. By the time she’d circled the gallery and back he was still standing and staring at our display. She then said, “I should have know you’d still be here staring at those things!” Her husband just shrugged his shoulders, turned to me and said, “Don’t pay her no never mind. She feels the same way about mine!” Well, you could have wiped me off the floor I laughed so hard.

Now, being strictly dickly, I can understand how a man might be challenged if junior’s not coming to attention on command. And I don’t care what anyone says about size. When you’re digging for gold, an extra inch or so on the end of that shovel comes in mighty handy. And if a man has started some serious bedroom acrobatics, performing a superb floor routine to get the audience warmed up, then he surely can’t be happy if he goes for a triple flip thing off the high wire and falls flat on his assets. 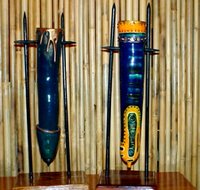 And did you see the season opener for that show, Nip Tuck? Who would ever have known that men actually think about the size of their testicles? I didn’t even know they came in sizes, much less that you can actually change the size with implants! And then of course that raises all kinds of questions. How large can Mutt and Jeff actually get? Are the kiwi-sized ones better than the walnut-sized? Do the walnuts perform better than the golf balls? What happens if side A is larger than side B? Are they all anatomically proportionate to the length of their handle? Is there a world record for the largest pair of balls? The smallest? If the “johnson” curves left or right, do the backup dancers sing or swing?

Great balls of fire! It’s almost too much for a mind to handle. But since I write about body parts a heaving and a shuddering in ecstasy, this is information that might come in handy one day. One never knows...
Posted by Deborah Mello at 11:45 PM
Email ThisBlogThis!Share to TwitterShare to FacebookShare to Pinterest
Labels: Mr. Ben

Good Golly Ms Molly,
Have you considered stand up? This was soooooo funnnnnny!!!!!!
My neighbors are surely going to complain about the outbursts of laughter in the middle of this night. No thanks to Mr. Johnson - he is peacefully asleep. Thanks for the collection of most real and entertaining stories!