TO TEMPT A STALLION 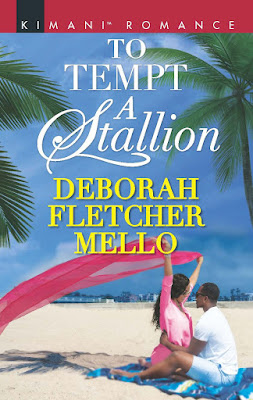 Second-chance romance
Orthopedic surgeon Nathaniel Stallion is ready to put down his scalpel to pursue his real dream—opening a restaurant in Carmel, California. He’s even hired a top-notch marketing guru to ensure his success. But Rebecca “Bec” Marks isn’t the unassuming buddy he remembers from college. This Bec is confident and wreaking all kinds of havoc on his libido. Now his best friend’s sexy curves have him thinking less about a publicity strategy and more about carnal seduction…Bec has had eyes for Nathaniel from day one. And regardless of Nathaniel’s naivety to her not-so-innocent schoolgirl crush, her ardor for the tempting newly crowned restaurateur remains intact. This time around she’s determined to win his heart for good. But when a rival beauty and Bec’s meddling ex-fiancé threaten her romantic plans, she’ll pull out all the stops to convince this Stallion that his soul mate has been right in front of him all along.

She had tried speed dating, church singles groups, blind dates and online dating. Blind dates had been the absolute worst. She’d lost count of the number of men who had turned around at the door, not even bothering to introduce themselves, turned off that she wasn’t a size-two supermodel. Most didn’t care to voice what their issues were. Only one had been bold enough to actually call her obese out loud, spitting it out like he was telling her something she didn’t know.

Despite the body shaming and sometimes hurtful comments, Rebecca hadn’t been fazed. She was comfortable in her skin. She liked her curves. It didn’t matter to her if anyone else had an issue. She was big girl magic embodied in a spirited personality and a compassionate heart. She was a great catch. She had money in the bank, owned her own home, ran her own business, and despite the fact she wasn’t the greatest cook, she was damn good in bed. Nathaniel had hit the relationship jackpot and the fact that he knew it was icing on some very sweet cake.


Posted by Deborah Mello at 5:33 PM
Email ThisBlogThis!Share to TwitterShare to FacebookShare to Pinterest