HIDING IN A CLOSET 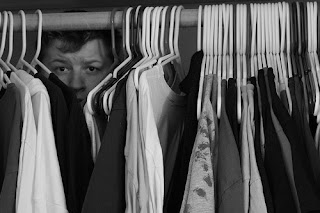 Karen found herself sitting in a closet while her guy handled business with his ex-wife. Almost three years into a relationship and she is hiding in a closet so that there is no drama with her man’s baby mama. Already fragile, this was the straw that broke her spirit and sent her into a downward spiral.

I couldn’t help but remember an editor who was reviewing a story submission. The female character had hit rock bottom and was struggling to find her way in the world. After reviewing the manuscript this female editor wrote back that no self-respecting woman would allow herself to be treated so miserably. I wrote back that no woman knows what she will allow until she is put into a situation that she has never been put in before. All women would hope that they react and do the right thing. Sometimes knowing what that might be isn’t so cut and dry.

When that doorbell rang and boyfriend reacted, Karen reacted with him. He pointed to the closet and there she stood in wait. I only had one thing to say about the situation. It’s been three years and boyfriend still needs to hide her from his ex? Karen might want to open her eyes and do some serious soul searching. Clearly, her man being more concerned with his ex than with her, says more about their relationship than either of them seems willing to admit.
Posted by Deborah Mello at 7:54 PM
Email ThisBlogThis!Share to TwitterShare to FacebookShare to Pinterest
Labels: Love Stories