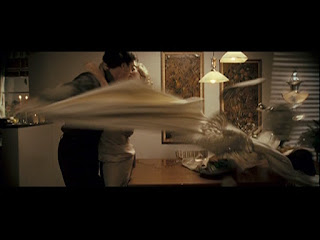 As romance love scenes go, mine have typically been quite tame in comparison to what other authors are writing. It took me a while to work up enough mojo to go into detailed specifics about my heroine and hero banging each other on the kitchen counter. And even then I tried to use as many lily-scented descriptions as I could muster. Then one day I was eavesdropping on a conversation between die-hard romance fans who were saying how much they preferred reading about that hard core, head-grabbing, nipple twisting, sexual encounter complete with the four-letter words and very non-technical descriptions of body parts. Shortly thereafter I got that book review where the reviewer said that if you wanted a romance book without the romance then mine was surely the one to read. At that point I figured I needed to step up my game but then the question became how far was I willing or even able to step.

By no means am I a prude. I have no problems reading about sexual encounters that have a couple’s toes curling while both are sweating like banshees in heat. Way back when I may have sweated a time or two myself so the more grunting and grinding the better. I do, however, have some issues writing it. It just takes a certain mindset for me to be able to get the right words out on paper and have it flow like I think the reader would want it to. It would probably help if I was having mind-blowing, toe-curling sex that I could draw on, but I’m not and y'all probably didn't really need to know that.

Anyway, I was reading an interesting discussion thread on Amazon.com today. It seems that not enough authors are detailing the “clean-up” after John and Jane do the deed. Much was said about a towel, tissue, and some soap and water. There would be readers who want to know that Jane wiped away the aftermath of John off her thighs and they don’t want it implied. They want fairly vivid descriptions. At least tell them Jane reached for a damp, rose-scented cloth to cleanse her soiled garden. It would seem that not mentioning a washcloth has become a “disturbing and disgusting trend”.

Now, I’m all for realistic but where do we draw the line? Do we really need that much detail? TMI, any one? Can’t we just assume Jane and John aren’t both nasty skanks who just pull up their dirty drawers and head off to the grocery store to finish the shopping on their chore list after their midday rendezvous in the backseat of Jane’s Mercedes? Can’t we just imagine they had a Wet One or two or three? Does the clean up really “enhance” the story? I mean really, what happened to those glowing, sugary, sexual encounters that made a romance novel romantic? Hell, if a romance novel can have a happily-ever-after ending, then why can’t the sex not be messy?

I am really pushing my own limits with my newest series. In my February release, To Love A Stallion. John Stallion and Marah Briscoe have a lot of sex. They have a lot of really good sex. And there is one scene when John does some wicked things with a paintbrush. I wrote that scene after reading somewhere that a paintbrush and some intimate moisturizer can be as good or better than oral sex. Personally, I can’t confirm or deny whether that’s true or not since I’ve never had sex with a painter before. But hey, anything is possible when it‘s fiction and I would hope that just imagining that it might be true would add to the fantasy. (It may also spark a creative encounter for those curious types.)

I would hate to think though that because I didn’t write about John disinfecting that paintbrush and Marah's crotch in some bleach and ammonia that the story was somehow lacking. ‘Cause really, I didn’t think anyone needed to know whether or not he washed that paintbrush pristine clean or used it instead to paint a landscape on some canvas.

PS. Please, go buy my book, To Love A Stallion. Buy a copy for a friend as well. It's really good and that paintbrush scene....well....you just have to read it for yourself. And that's my shameless plug for the week!
Posted by Deborah Mello at 5:15 PM
Email ThisBlogThis!Share to TwitterShare to FacebookShare to Pinterest
Labels: Writers Corner

I read To Love A Stallion and I absolutely loved it!! It was one of those books you just don't want to put down. I cannot wait to read about the other Stallion brothers.

Thank you so much Tiffany!!!!
It's one of my favorites and the others are going to be just as HOT!
Hope all is well with you !